He's got the high-definition jawline, the shock of spiky blonde hair, but most importantly, he has the nose. Vocally, his distinctive, naturally-raspy voice sounds like the legendary Stewart, and his range easily nails every high note from Stewart's younger days. So, it's no surprise that tribute artist Rob Caudill has carved out a career 'recreating' Rod Stewart. From belting out all of Rod's greatest hits to kicking out soccer balls, to spinning mic stands - Caudill's high energy show is a must-see event for people of all ages.

You'll hear favorites like “Maggie May,” "Have I Told You Lately", "Forever Young" and "Tonight's the Night". Rob takes you on a journey of Rod Stewart’s biggest hits in Rock and Roll, Pop and The Great American Songbooks.

Rob works with the world famous “Legends in Concert” show out of Las Vegas, along with doing his own productions all over the world including Australia, Cambodia, Canada, China, Finland, Indonesia, Japan, Malaysia, Mexico, Singapore, South Africa, Sweden,
Thailand and of course The United States.

Besides being the number one Rod Stewart tribute artist, Rob has had his own record contract, has done session work with Joe Walsh of the Eagles, and jammed with many others such as John Entwhistle of the Who, along with members of Cheap Trick, Allman Brothers Band, Lynyrd Skynyrd, Survivor and Red Hot Chili Peppers just to name a few.

Rob’s show is truly a “must see show!” 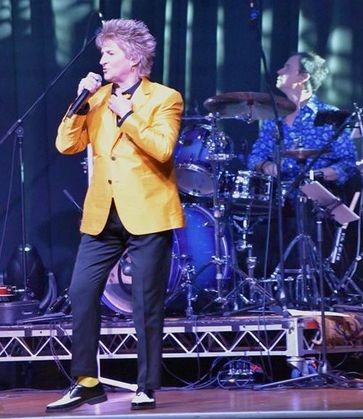 "Rob's voice and look is unbelievable. It is like looking at Rod Stewart himself."
John Entwhistle of "The Who"

"Rob is Rod! No doubt about it. This is one impersonator that will make you do a double take. He is that good."
Joe Walsh of "The Eagles"

“Rob gives tribute to Rod Stewart. I have known Rod (Stewart) since 1968 when he was with Jeff Beck. Rod and I have written together, four of his hits: Do Ya Think I'm Sexy, Young Turks, Infatuation and Crazy 'Bout Her. I was also partly responsible for Rod, Jeff Beck and I recording People Get Ready which was an MTV video hit! Rob is a 6 out of 1-5. A stone pro!!"
Duane Hitchings - Musician, Songwriter