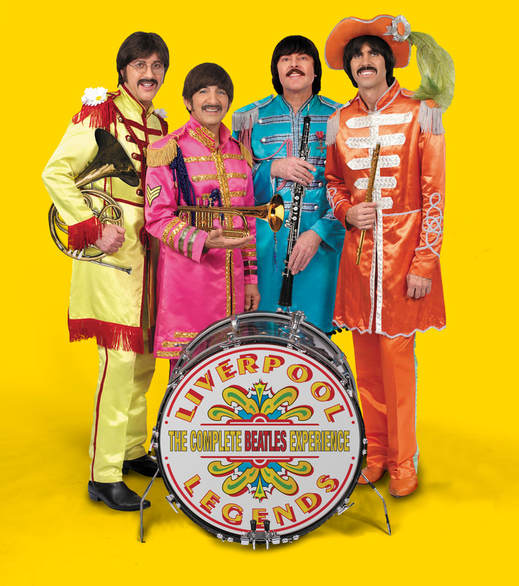 2019 is the 55th Anniversary of the first appearance
of the Beatles on the Ed Sullivan show.

The Liverpool Legends are the only Beatles tribute group assembled and coordinated by the late George Harrison's sister, Louise Harrison.
Liverpool Legends “The Complete Beatles Experience!” are four incredibly talented musicians and actors that bring to life one of the most important musical groups in history.

This February 9th, 2019 will be the 55th Anniversary of the Beatles first performance on the Ed Sullivan show!   It was the start of something big here in America!

Liverpool Legends perform songs spanning the entire career of The Beatles as well as the fab four's solo years. With precise attention to every musical detail, along with costume changes, vintage instruments and special effects, Liverpool Legends will make you feel like you are watching the real thing!

The Liverpool Legends band has toured the world with sold out performances to thousands of Beatles fans in Mexico, Guayaquil, Ecuador, India, Israel, Chile, Monterrey and more.
They've performed at Carnegie Hall, headlined at the Rose Bowl for over 68,000 people and captured the national spotlight when they re-created The Beatles famous 1966 concert at Busch Stadium in St. Louis. Their show in Branson Missouri, has run for over a decade and has won multiple awards for consecutive years.